If you are in the field of two-way radio communications, I am pretty sure you know about the Galaxy brand. To simply put, Galaxy DX-959 is the best Galaxy CB radio you can ever get.

This Galaxy top-seller is nothing short of perfection. The brand possesses the secret to winning the hearts of professional drivers!

Based on its powerful features and superior performance, none comes close to DX-959!

Before heading into the Galaxy 959 review, here is what we feel about the CB:

➥Check the Latest Price on Amazon

Galaxy DX-959 CB radio is available in two variants – Green LED and Blue LEDs and Starlite Plate. However, both models are similar in features and performance. Below you can find our detailed analysis of this amazing CB:

One highlighted feature of Galaxy DX-959 is its spectacular range. You won’t even have to struggle with weak or poor signals miles away from the highway! It works well with even the simplest CB antennas.

Though the device takes some time to warm up to use the SSB feature, once it does, it outperforms others.

Typically, the price of the radio determines its quality and performance. However, this mid-priced radio has it all! That’s what makes it a success!

The high-tech features and a reasonable price make it a perfect deal. In short, DX-959 excels in all departments! Users that have bought this radio recommend it based on consistent power output. It doesn’t run into any problems with overheating either.

DX-959 has a three-level switch to adjust the tone as desired. You can set it to high, low, or medium. It helps deal with unwanted static.

The CB Radio also has the exclusive Galaxy Noise Filter (GNF), which cuts down on noise. It facilitates the recovery of weak signals, while also limiting high-frequency noise.

Along with the Galaxy Noise Filter, you also get the Noise Blanker (NB) for enhanced voice clarity. And, the Automatic Noise Limiter (ANL) eliminates electric and static noise.

Lastly, the volume/squelch knob enables you to adjust the volume

Users seem to be thoroughly enjoying the big and easy-to-read displays on this model. Unlike older radios, this one has meters for power output. It also includes SWR, signals, and modulation readings, which are all easily understandable.

Additionally, all knobs and controls are well-placed on the front. It reduces the time of scanning through menus and keeps all options at a safe distance. These are easy to master by experts and beginners alike.

Once you memorize the controls, you won’t even have to glance at it to operate. That reduces the risk involved and gives you a safe and smooth driving experience.

Moreover, one feature you may like is the roger beep. It has an ON/OFF microphone gain knob added at the end of the transmission to indicate when you have finished talking.

When driving through the dark, it gets challenging to operate through the knobs. However, worry not, as the bright display takes care of the problem!

The Galaxy DX-959 has more features than most CB Radios out there. The unique GNF on this model helps with receiving signals on SSB from remote areas. The factory roger beep includes an LED indicator so that you don’t accidentally leave it on when talking local.

Most importantly, DX-959 comes with a variable power knob. If we have to pick one, this one’s the most important feature on the model. It can turn the radio down to a 1-watt dead key. You can also run it at full power by turning the knob.

The frequency counter gives precise and mostly accurate measures for SSB. It is particularly useful for those looking to expand the frequencies.

Some additional features you will love using the CB are:

Every top-product comes with its fair share of shortcomings, and so does DX-959!

Despite reigning the CB market for 16 years, many experts point out a few limitations. First of all, the large model becomes slightly impractical for most cars and vehicles. It works well in trucks with ample space.

If you plan on using it in a home base, the size may not even be a concern.

Additionally, the volume and squelch, two-in-one knob, may be complicated for a few. A few Galaxy 959 users have also complained about the knobs being flimsy and have suggested the need for better quality.

There is also a lack of a six-digit frequency counter, which doesn’t help with SSB. Instead, it has one with five-digits.

Lastly, the SSB feature needs some warm-up time. That may be a little time-consuming for professional drivers.

If you want to find out other Galaxy CB radios offering better performance, you can find them here: https://xroadgps.com/best-galaxy-cb-radio-reviews/ 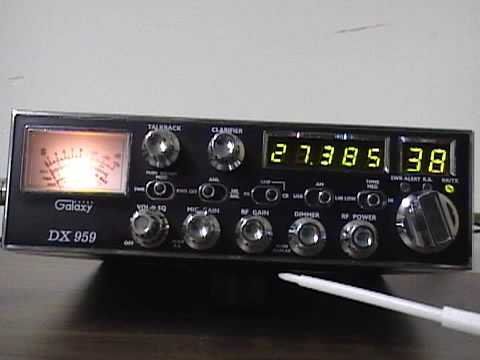 DX-959, like most Galaxy radios, has an Automatic SWR circuit, which makes the calibration procedure a breeze. It also displays the SWR scale with a five-digit frequency counter. The built-in meter rids you of the hassle of setting and tuning the antenna each time.

The antenna’s length is directly proportionate to channel frequency. We recommend tuning the antenna one-time for optimal SWR.

Set the channel to 20 and press the push-to-talk button switch. Next, tap the antenna and read the measure on the SWR meter on your radio. Adjust the length until the reading decreases and then starts to increase again.

It is against FCC rules to increase the power of any radio over 4 watts AM or 12 watts SSB.

The Galaxy DX-959 is comparatively easier to modify, which allows the radio to output over 20 watts. Turn up VR14, the AM high power variable. It will enable you to swing around 15 watts.

For peak-reading, the following modification can be handy:

How to change the frequency on a Galaxy DX-959?

To expand frequencies on the DX-959, you can use the channel expansion modification.

Where is the receiver amplifier in Galaxy 959 DX?

The RF gain control can reduce the gain of the receive amplifier in conditions with a strong signal. You can find this knob among the bottom knobs on the radio.

If you wish to tune in stations on SSB, this knob comes in handy.

The control allows you to adjust the tone to low, medium, or high. It mainly comes in handy when there is a lot of static.

Modify the display brightness in darkness. You can also turn off the radio display light entirely by pushing the button.

It sets the power output.

Using this control helps you set the volume of the microphone.

Instead of offering these separately, Galaxy gives you the two in a single control.

Test your microphone volume and listen to yourself while transmitting.

Despite being over a decade old, the 959 has a loyal fan base dedicated to it. It has got all the right features at a very economical price. What’s even better is it also has an SSB capability.

With the long-range communication and crisp and clear audio, it sure wins hearts.

Galaxy DX-959 is a hit among most drivers for all the right reasons. It satisfies all the needs and doesn’t leave the user itching for more!

The pleasing possibilities aren’t over! It has an exceptionally advanced PA system, outstanding roger-beep, variable output control, and more.

It gives all the other radios a run for their money.

➥Check the Latest Price on Amazon